This one would be hard to find, I was told.

It took my friend Isabelle Diederichs and Allan Weitman a week of scouring the Mark Kingsbury Bridge over the Illecillewaet River to find it. They had to use up all the supplied hints and contact the person who placed the cache to locate it.

“It took six or seven times going to find it,” Diederichs tells me. “We went back with flashlights at night to see if it looked different.”

I didn’t know what I was looking for, but I knew it wouldn’t be easy to find.

I was out geocaching, and Diederichs and Weitman were my guides introducing me to this global adventure pastime. 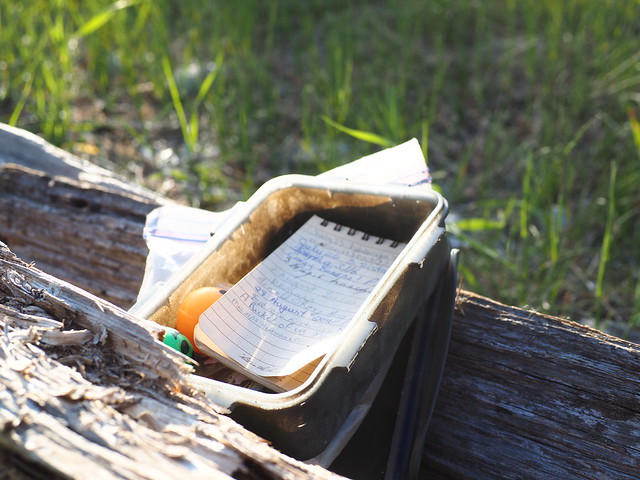 Photo: A notebook in a cache on the greenbelt allows you to inscribe a note to other geocachers.

Geocaching is a treasure hunt of sorts – where you use your GPS or smart phone to search for hidden items all over the world. It was Pokemon Go before Pokemon Go existed, and the prizes are real, not virtual.

The easiest way to take part is to download the Geocaching app on your phone. The app shows the location of every cache on a map and a compass will direct you towards it, but it’s up to you to find it once your close.

Some enthusiasts use a GPS device for even greater precision.

The caches can be small boxes filled with surprises, or they can be tiny items the size of a small bolt known as a microcache. I was told of one cache that looked like a butterfly. You might notice the butterfly on the tree, but you won’t know it’s your target until you realize it’s awfully still.

I met Diederichs and Weitman on a warm evening at Kovach Park. Both are local enthusiasts who took to the activity for the sense of adventure it brings.

Combined, they’ve uncovered almost all of the caches in the Revelstoke area, and many in nearby regions.

They rapelled down the climbing area at 12 Mile, explored an abandoned mill near Golden and discovered a beautiful waterfall just outside of Revelstoke in the process.

“We found so much cool stuff just by trying this app,” said Weitman. 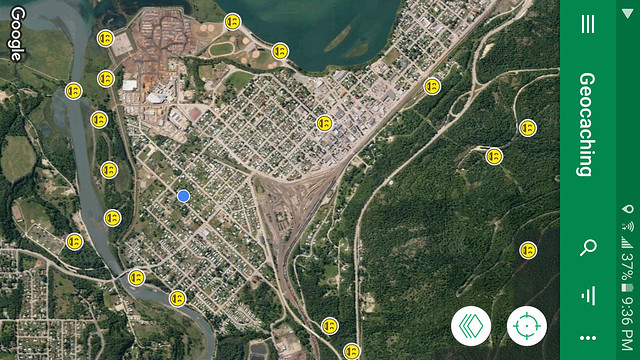 Photo: A map of some of the geocache locations around Revelstoke.

There’s dozens, if not hundreds, of caches in the Revelstoke area. There’s a series along the Greenbelt, set up to be found in one good walk. There’s more in the Big Eddy and up Highway 23 North all the way to Mica, if you’re up for the drive. There’s a number of caches in Mount Revelstoke National Park, including one at Jade Pass; and there’s one on Frisby Ridge.

There’s one at the summit of Mount Begbie.

“It usually brings you to nice areas – the natural side of places,” said Diederichs.

There’s a mystery cache in Grizzly Plaza where you have to piece together a series of clues to find in order to find it. Diederichs and Weitman found a cache in Nakusp that was at a man’s home; when they found it, he told them stories about other geocachers that showed up.

It’s this sense of discovery that appeals to geocachers worldwide. It gives people with the urge to explore with something to aim for, and it directs people to places they likely wouldn’t have found on their own.

Anyone can hide a cache, and anyone can find it. 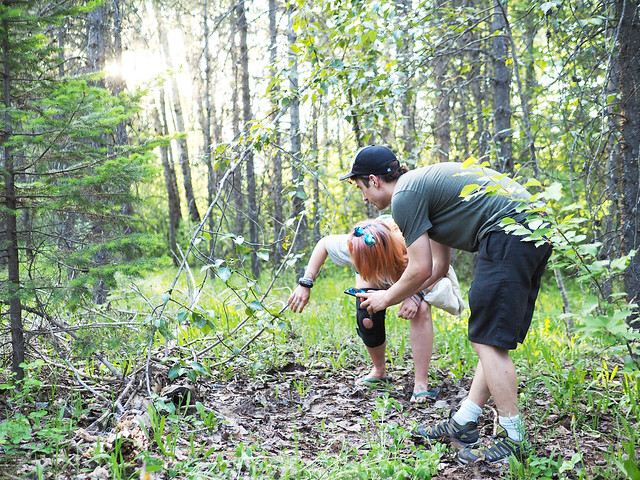 Photo: Isabelle Diederichs and Allan Weitman look for a cache on the greenbelt.

Of the four I found (with some help), three were listed as medium-sized and the caches were small hard-plastic boxes with colourful keepsakes and a notepad inside so you could let others know you found it. I didn’t find them easily, but by the fourth, I noticed a pattern and feel those bigger ones should get easier from now on.

I knew it wouldn’t be obvious, and I knew it was small, so I looked up and down, trying to find an out of place bolt or a nick in the wood.

There were two other people on the bridge when we got there. Geocachers call them Muggles – people who aren’t geocaching.

I was being fed hints but I still couldn’t find this microcache. I was crouched over, brushing the deck and the railings for signs, earning myself a splinter in the process.

“The hardest part about geocaching is it looks like you’re up to no good all the time,” joked Diederichs.

Finally, my fingers touched the right object; I found my prize. 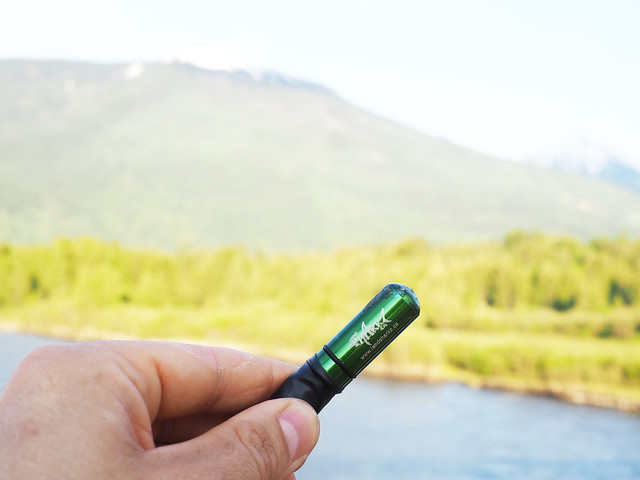 An exploration into electric adventure

Miss BC competition a ‘catalyst’ for confidence, advocacy

QUIZ: How much do you know about Canada?