The road is remote and known for becoming a soupy mess in the rain. Snow can fall regardless of the time of year. It is engulfed in wilderness. Welcome to the Dempster Highway, a road built from gravel and rock shale atop a layer of permafrost.

Andrew Moore plans on biking this notoriously inhospitable road. In a 736 kilometre trek, Moore will fly into Inuvik and bike to Dawson City. Between the two locations there is but one pit stop — a lone gas station. At the Arctic Circle, Moore will plant a Revelstoke Bike to Work Week flag.

The catch? Moore is challenging the citizens of Revelstoke to clock 20,000 kilometres in this year’s Bike to Work Week (BTWW) from May 25–31. If Revelstokians rise to the challenge, on June 1, 2016, Moore will pedal the highway.

“Last year Revelstoke biked 16,338 kilometres in BTWW. I think the community can do 20,000 kilometres this year. Especially as biking to school can now also be counted,” he says.

Moore isn’t new to long distance bike challenges. Last year he biked to work during BTWW from Edmonton. The trip, just over 700 km, was a feat he accomplished in six days.

But why change from a road bike to a trail bike and take on a remote stretch of highway? “I wanted a different set of hazards,” Moore explains. “The road traffic from Edmonton offered some pretty hairy moments. The Dempster Highway is quieter, spectacular and a bucket list kind of thing.”

Moore will be riding on a bike outfitted with 10 ply tires, double what a rider would regularly use, in an effort to avoid the torn tires that plague Dempster highway drivers. “People say the road eats vehicles,” Moore laughs, “so I want to be ready.” With only one inhabited stop in the middle of the trail, Moore will be unable to do food drops or eat out. “I need to pack about 25,000 calories with me,” he explains. “Or have a pilot driver leave from Dawson while I start from Inuvik. When we cross paths I’d replenish my food.”

Though Moore has tackled big rides, it might be a surprise to learn he didn’t bike on a regular basis until 2013. “I was overweight and one day driving home from work, I blacked out,” Moore says. “It was a wake-up call. I realized I needed to change my entire lifestyle. I went from 260 pounds to 200 pounds, from a size 40 to a size 32/34.”

Moore avoided fad diets and extreme work out schedules he wouldn’t be able to maintain. Instead, he made healthier choices. He started biking everywhere. He swam and lifted light weights. When he lost the weight in the summer, Moore contemplated how to keep it off all winter.

“I got on my bike and I stayed on it,” Moore smiles. “I bought studded tires for it and rode all winter. And the weight stayed off.”

In three years Moore has gone from passing out behind the wheel to having adventures on two wheels most people will only ever imagine. 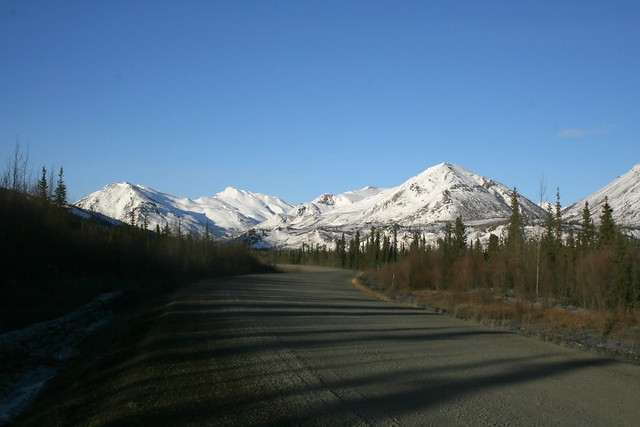 PHOTO: The Dempster Highway travels through some of Canada’s most remote and spectacular wilderness. Photo by Ian Mackenzie, Flickr Creative Commons

Bike to Work started in Greater Victoria in 1995 in an attempt to promote cycle commuting. By 2008, a provincial not-for-profit coordinating body, Bike to Work BC, was created. In 2009, Revelstoke joined in with 15 other communities. By 2014 there were 44 participating regions and communities.

“Revelstoke is very involved,” Suzanne Grieve, Revelstoke’s Recreation and Facilities Coordinator explains. “Each year we add new riders who have never biked to work before. Last year was exceptionally good.”

This year Grieve says the city of Revelstoke issued a community challenge to the city of Smithers. The winning city takes home a trophy created last year when Smithers challenged Terrace and won.

To participate, commuters go to biketowork.ca, joining as a team or individual, biking either to work or school. People can then keep track of the distances they have commuted. There are grand prizes to be won and sponsorship opportunities.

Children have a low risk of catching and spreading COVID-19

2020 overdose death toll rises to 73 in the Okanagan

Just under half of the deaths occurred in Kelowna

Kootenay-Columbia representative criticizes a lack of focus on jobs, support for resource sector

Across the region, 34 cases are active

We can get through this, new local government leader says

Historic BC Tree Fruits head office in Okanagan for sale