On Tuesday, hundreds of Revelstoke students attended assemblies at the performing arts centre for a presentation on sexual identity and gender orientation.

The learned about the entire LGBT2SQ+ spectrum — lesbian, gay, bisexual, transgender, two-spirit, queer and questioning — from Brandon Yam and Gavin Somers of Out in Schools, a Vancouver organization that seeks to facilitate dialogue about gender identity and sexual orientation.

Students learned how complex the subject is, and how wide-ranging sexual orientation and gender identity can be.

Coming out in school still isn’t easy; LGBT2SQ+ students have a higher suicide rate than the general population.

So, it was good to speak to Frankie Allen and hear how her experience coming out as transgender at Revelstoke Secondary School has been supported by her fellow students.

The grade 12 student at Revelstoke Secondary School first started telling people she identified as a woman in grade 10.

“I always had the thought I was but I pushed that down most of my life until one friend came up to me and asked me if I was because I displayed more feminine features and was happier when people addressed me as a woman,” she told me. “I kept it a secret because I didn’t want people to think I was weird.”

Frankie’s legal name is Frank but she goes by Francine on Facebook.

Coming out was somewhat of a relief. No longer did she have to repress her feminine tendencies and pretend she was somebody she wasn’t.

And nobody at school has taken any issue with it either, she says.

“People, I feel, have been more accepting of me now that I’m open because I’m no longer pretending to have these masculine attributes,” she said. “School has been much better now that I came out. There hasn’t been anyone mean or rude about it.”

While Allen’s experience has been mostly positive, community groups are still taking steps to ensure youth feel comfortable coming out in Revelstoke.

“It’s to make sure our community remains a welcoming and an open place, especially for youth and those that are questioning their sexuality and gender orientation,” said Megan Shandro, the community’s youth liaison.

The workshops are being put on by Safe Spaces Revelstoke, the Stoke Youth Network and SharedCare. They will provide a primer on queer youth culture and provide an overview of skills for working with queer and questioning youth.

“There’s lots of support and its important to make sure our community remains inclusive and open,” said Shandro. 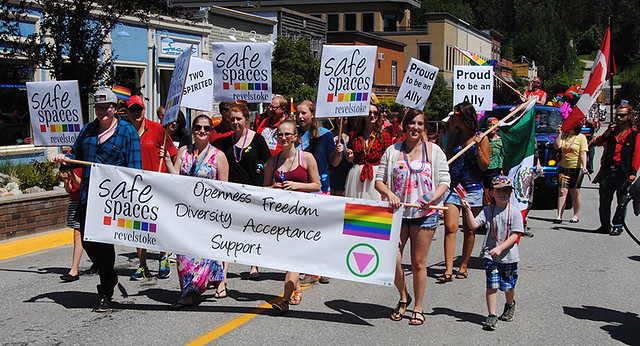 The Revelstoke School District has made moves to support LGBTQ students. Last year, the Board of Education passed a sexual orientation and gender identity policy. RSS was set to host Out in Schools for an assembly that will include all elementary students on Tuesday, May 3. All four schools in Revelstoke will be mounting a rainbow plaque to indicate they are safe spaces for the LGBTQ community.

Allen has talked to other students who have questioned their gender. “I just sit down and have that long conversation with them to see where they are on the spectrum and try to give them advice.”

She didn’t tell everyone she was transgender at first out of fear they would be judgmental. She avoided telling her aunt she was living with at the time out of fear of how she and her boyfriend would react.

Over time, she has found the community welcoming and inclusive, and her fellow students have been very open with her. She hasn’t started hormone treatment yet but tries her best to look feminine.

“I find it’s a good situation for anyone at the LGBT community here,” she said. “If you’re a gay or lesbian, you can take a prom date of the same sex and there won’t be any problem.

“Everybody’s been very accepting and very welcoming about it.”

Long-awaited City of Revelstoke audit coming out on Friday

VIDEO: Escape from Fort McMurray firestorm, how you can help

Testing is available to anyone with cold, influenza or COVID-19-like symptoms

There will be curling this winter in Revelstoke

No drop in will be permitted

The winners will be announced Nov. 7

No decision yet for Vernon man appealing murder sentence

At least 49 cases of COVID-19 linked to wedding in Calgary: Alberta Health