Bob Walker was sitting inside his living room when the wind hit.

Gusts of up to 96 kilometres per hour pounded Revelstoke on Sunday, July 23, and he watched as trees snapped around his home.

And then the calls started coming in.

Walker is the owner of Revelstoke Tree Care and in 12 years as an arborist, he’d never experienced anything like last week’s storm. Even Helen Grace, who has lived in Revelstoke for almost 90 years, said she’s never seen anything like it. Trees fell all over — the Soren Sorensen trail in Mount Revelstoke National Park was badly damaged and is closed; as is the Giant Cedars Boardwalk. An army of volunteers went out with chainsaws to clear trails around Revelstoke.

Thankfully, there were no reports of injuries. 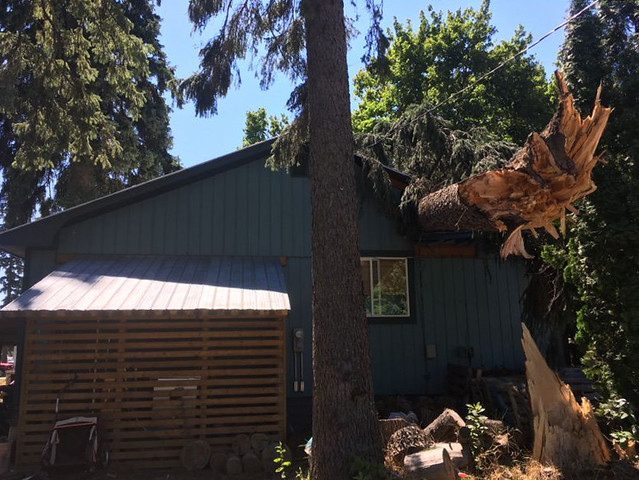 Last week, Walker attended 11 different calls and he said 33 are pending. His focus was on dealing with trees that were threatening homes, and then moving down the list from there. With Jake Roos of Loki Tree Services away working on wildfires, Walker had a big work load ahead of him.

“(I saw) everything from trees on cars, trees on houses, trees down in yards, trees that are leaning over houses and cars that aren’t down yet,” Walker told me.

“The first couple of weeks is just damage control, getting rid of everything that’s more urgent. As the following weeks go on, it’s taking care of future problems.” 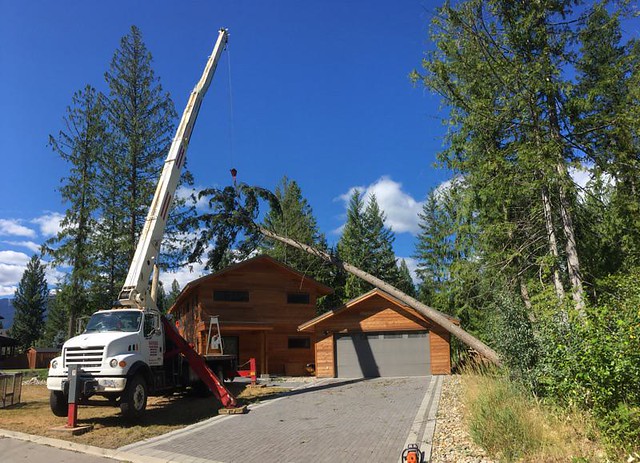 Then there was my backyard. I had about a dozen beautiful, old spruce trees surrounding my yard, and when the storm hit, half of them came down. I wasn’t home, but I received a call from my roommate when it happened, urging me to get home right away. Ten minutes later, I was standing outside my house with my neighbours. The trees had come down and a cluster of three were hung up on another big tree. The biggest tree in my yard was completely uprooted and crushed my neighbours camper. We watched nervously as that one big tree swayed and bent in the wind; if it came down, it could fall on my neighbour’s house.

Thankfully, it held up. I called Walker right away and after describing the scene, he said he would come by on Monday. 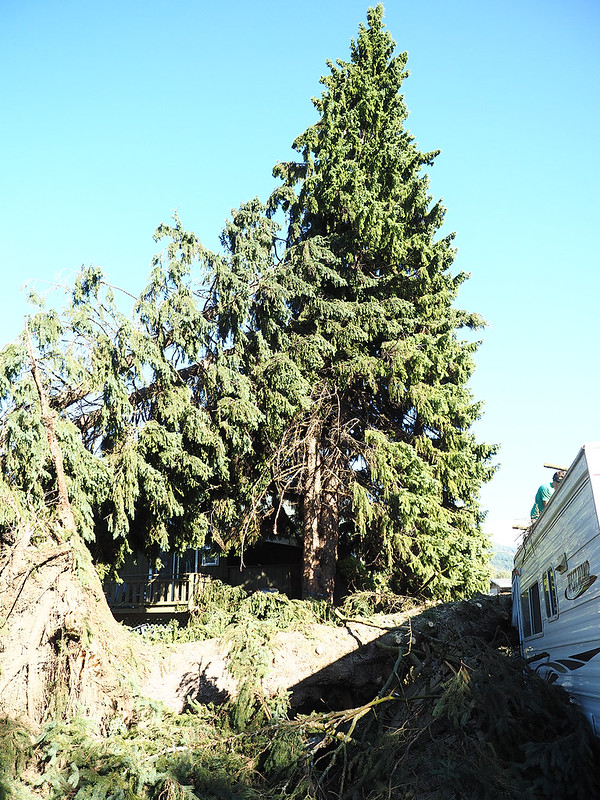 “This doesn’t look good,” he said the next day.

“When can you take care of it?” I asked, hoping he’d reply, “Tomorrow.”

On Tuesday, he texted me a photo of a tree that fell on a house. “I have a few extra guys and maybe can get to your place tomorrow afternoon,” he said in a text. “I’m trying. This is what I’m dealing with now.”

Walker ended up coming at 7 a.m. Thursday morning, but in the intervening two days, I slept fitfully, expecting to be woken up in the middle of the night by a big crash. I gazed up at the tree and looked at the roots to see if they moved every few hours. I was incredibly thankful my house was unscathed and helped my neighbours clean up the mess in their yard. You don’t realize how big a tree is until you start stacking its branches on the ground. 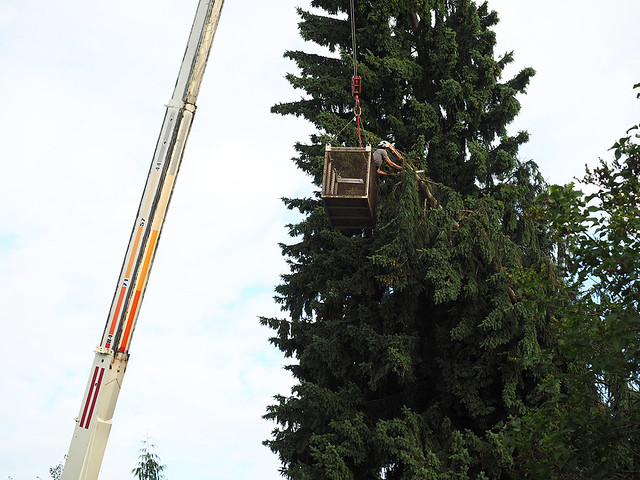 Fortunately, the weather was calm, the trees held up and on Thursday morning, I woke up to the sound of Walker’s crew arrive. He came with Ian Sasges, a crane operator, was hoisted into the canopy, and set to work chopping limb after limb from the standing trees so he could get at the leaners. His crews on the ground grabbed the fallen branches and ran them through the chipper.

When I returned home for lunch (and to meet the insurance adjustor), Walker was taking the tops off the standing trees. He’d make a cut, then carefully push the logs to the ground. They would crash through the lower branches before landing with a thud.

By mid-afternoon, he’d removed the danger trees and moved on to the next house. 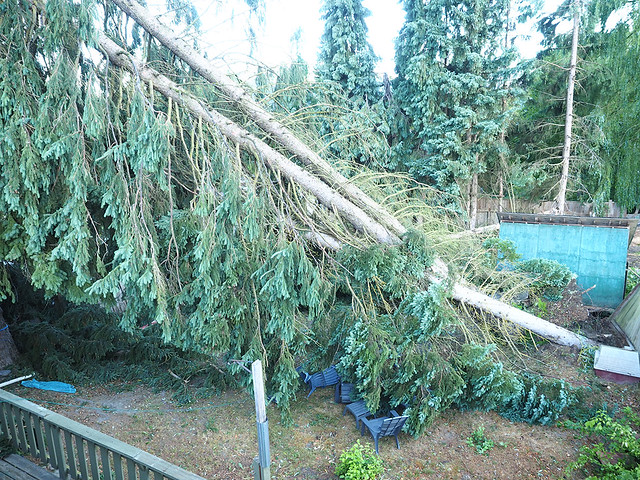 “Your yard was really bad because all the trees were tied up and twisted and a tangled mess. Most people was just one tree that came down,” he told me later. “Yours was the worst for volume, but not necessarily for damage.

“On Fourth Street one guy had six trees but none came down,” he added. “But they were all massive spruce leaning over the neighbour’s house.”

Walker worked six 14-hour days last week and took Sunday off (I saw him running the Keystone trail that day). He expects to be slammed for another few weeks.

“We’re working on the Greenbelt right now because it’s pretty trashed, trying to get that open for the public,” he said.

I asked what advice he had for people worried about the trees on their property. Walker said that if a tree survived the storm, it’s a sign it’s a strong tree. Still, if it looks different now, that means it may have been impacted.

“See if the tree is any different, if it’s got any different lean from before the storm to now,” he replied. “Look for cracks, look for the ground upheaving, the roots popping out, major leans.

“If they are worried about it, they are going to have to call someone to have a look.”

Editor’s note: Absolutely no payments or compensation of any kind was discussed or received for this article.

What to do if you see a camper with a campfire