A local group of whitewater enthusiasts is aiming to build a wave park they hope will act as a tourism draw to Revelstoke.

“Whether they’re stand up surfers, stand up paddleboarders or whitewater kayakers, they all want the same thing — they all want a big wave they can surf on that’s predictable and they don’t have to go in the ocean to do so,” said Brendan Ginter, who is the president of the nascent Revelstoke Community Wave Park Society.

What is a wave park? In its most basic form, it is a modification of a river to create a standing wave for paddlers or surfers to play in. They’re generally made with rocks, concrete and rebar so they’re strong enough to withstand the forces of the river.

“There are hundreds of these things throughout the world now,” said Ginter. “People started making modifications to rivers, or doing man-made rivers for kayaking purposes in the 60s — mostly for slalom kayaking.”

I met with Ginter last month by the Illecillewaet River Bridge, near where the society hopes to build a wave. We stood by the river, near the large parking lot where the greenbelt path starts at Fourth Street and where the city dumps snow during the winter.

The first thing he did was make it clear project is still in its infancy. The society only recently registered as a non-profit and elected a board of directors. They’ve held had a few meetings and met with Alan Mason from the City of Revelstoke and Cory Legebokow from the Ministry of the Environment/ They applied for a Kraft Celebration Tour Grant.

Man-made wave parks exist throughout the United States and Canada, but there are none in B.C. that I found out about, though one has been in the works in Fernie for two years now.

“There isn’t a lot of precedent set in British Columbia for this type of facility,” said Dan Savage, who is heading up the Fernie project. “Certainly there are similar facilities in Alberta, and many in the United States, but not a great deal of precedence in this legislative body.”

Savage said they need three permits to build the park. First, they need tenure over the river. Second, they need to apply for permission from the Coast Guard and lastly, they need to get the environmental approvals in place.

“Once we have our permits we need an engineer to sign off that there will be no increase in water level and that the structures are designed not to gather logs or rocks or ice — so they’ll be self-cleaning,” he said.

He expects the permitting process to take a year and that park will cost about $500,000 to build, though he’s hoping for in-kind donations of material and equipment to help lower the costs. 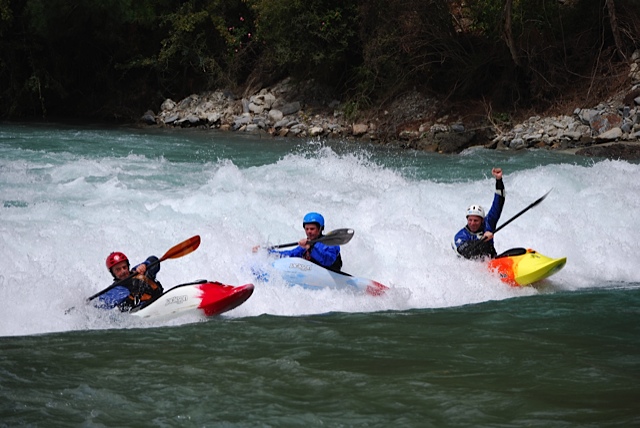 In Revelstoke the goal is to build one wave, ideally on the stretch of the Illecillewaet River between the Fourth Street bridge and Bridge Creek. Ginter said their first step is to raise money to conduct an engineering study to see where the wave could be built. They hope to work with Scott Shipley of S2o Design, a company that specializes in building whitewater parks.

“Before we do anything else, we should see if it’s even feasible, because we don’t know,” he said.

The challenges are numerous, especially given the hugely varying levels of flow on the Illecillewaet. There’s the matter of getting all the right permits, finding the right spot for the wave, raising enough money for the project and then getting it built — not an easy task in a moving river with a short construction window.

One thing that both he and Savage said is that the waves are actually good for fish habitat because they create standing eddies that fish enjoy.

“We have to take all these concerns seriously because they’re all road blocks,” said Ginter. “Fisheries is going to be the biggest thing. Ministry approval is going to tough and then getting the city on board is going to be difficult.”

He believes Revelstoke has the potential to become a major whitewater destination — all it’s missing is a place for beginners to learn in. The wave park would help in this regard. “Our plan is one single standing wave. That’s it. Nothing crazy,” he said. “No major modifications to this river that has modified many times before already. All we’re thinking is it’s something that draws tourists.”

BCTF revises demand in talks to ward off full strike

Some 300,000 doses of flu vaccine ready for distribution across Southern Interior

The November show will feature Zuzana Riha in the main gallery

Snowfall in Okanagan breaks records dated back to 1899

Penticton has received over 10 cm today, surpassing the 8 cm record set in 1957

At Mission Hill Elementary, the election is a chance to learn about the democratic process

At dissolution, the NDP and Liberals were tied with 41 seats in the legislature, while the Greens held two seats

Resort’s snow base 41 cm deep, one month until opening day

‘The list of charges goes on and on,’ said RCMP Sgt. Rob Hughes

First Andrew Allen plays two sold-out shows, next up have a laugh with comedian Mike Delamont