It’s a shock to see the Minto Manor these days.

Stripped of its roof, third floor, dormers and wraparound verandah, there’s little left of the nationally significant historic building aside from the brick walls — and even some of that has been removed. The interior has been completely gutted and is little more than a bit of wood framing.

It’s all part of a major restoration of the 112-year-old home that is being undertaken by new owner Andrew Goldman and contractor Wellwood Custom Homes, which is run by Derek Lammie.

“If one’s going to do it, after 120 years, it’s time for a service so it can last for another 120 years,” Goldman told me. “I think everybody going up and down Mackenzie will look at the place; if they’ve loved it, they’ll love it more and they’ll enjoy the fact this point of beauty of the city is back where it should be.”

Goldman, who’s from London, UK, first came through Revelstoke on a heli-skiing trip at the CMH Gothic’s lodge north of town about a dozen years ago. At the time, he was looking for a place to build a ski chalet in North America and Revelstoke struck him as a possibility.

“I thought this was a wonderful place but before the ski hill was announced, it wouldn’t be practical for mixed skiers,” he told me. “Then they announced the resort was going to come, so that was the nicest possible thing.”

Goldman purchased a property at the resort and built a large home here, and like many, he really enjoyed the community. The Minto Manor was a building that stood out to him due to it’s “funky” Edwardian-like style.

“It was clearly of that ilk, but it was slightly different because of the stonework and the way the building looked. I thought it looked unusual. It looked a bit dark but a bit interesting. I always liked it,” he said. “A stone house and a wraparound deck in a position like that – you get 360 views from the upper floors. The views are absolutely magnificent all the way around.”

The house was built in 1905 by Robert Howson, one of the city’s most prominent businessmen. He owned a furniture store and the funeral parlour in town

“It was definitely one of the premier heritage homes in the community,” said Cathy English, the curator of the Revelstoke Museum & Archives. “There was a few very distinctive homes that were built by local businessmen that were fairly prominent community members.”

Most of the homes were built on Mackenzie Avenue, but The Birches, as the Minto Manor was originally known, was arguably the grandest of them all.

“The heritage value of Birch Lodge is represented in the architectural styling, which features Palladian symmetry,” states the national historic registry. “Its concrete block construction reinforces the idea of wealth and permanence and reflects the growing confidence in the young town.”

E.C. Froome was the contractor who built the home. A local mason, he set up a concrete plant to create the bricks that make the house so unique. It featured a wraparound porch and unique dormers that were pitched on two sides and flat on the other two sides. Other unique features, according to the registry, are the columns supporting the verandah, the upper balconies, the symmetrical design, and the stained glass windows.

Howson lived in the house until the 1920s, at which point he left Revelstoke. The house was sold to the Robins family, said English, and was turned into a rooming house. It stayed that way until the 1980s, when Vern & Gwen Enyedy bought it and turned it into a bed & breakfast known as The Piano Keep for the collection of pianos they kept there. “(The Enyedy’s) shook up the arts & culture scene in the community and really re-energized it,” said English.

The house remained as a bed & breakfast until Goldman purchased it and was most recently owned by David & Edna Mae Johnson, who operated it as the Minto Manor. 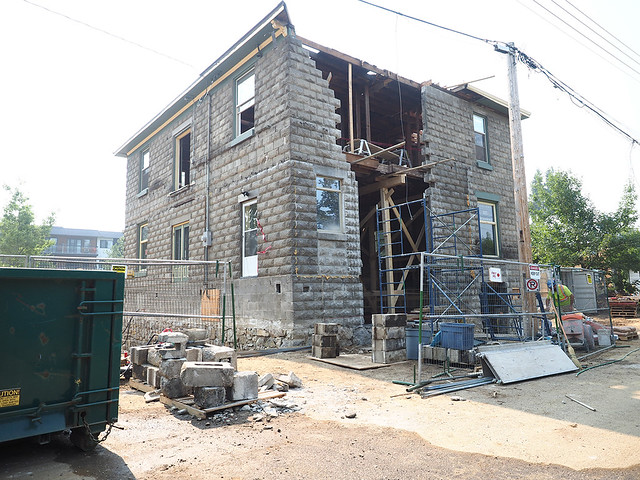 Restoring the Minto Manor is a huge project. Demolition started on the interior in the spring and the exterior was taken apart after council approved the heritage revitalization permit in July. It didn’t take long for the roof to come off and the work to begin in earnest.

“The hard part is duplicating what’s existing,” said Derek Lammie. “We realized we have to remake these things. It’s not like you can buy them off the shelf at the local hardware store.”

A major element has been keeping track of everything as it’s come down. As a designated heritage building, the work must follow certain standards and the look of the building must be maintained.

Lammie and his crew of seven full-time workers (plus sub-contractors) have documented everything as its come apart so they know how to put it all back together.

“We’re hoping to re-use some of the elements we took out of the house,” he said. “We painstakingly took a lot of extra time to take the house apart in stages so we can actually save that material.”

Lammie said everything has been put into storage. Some of it might get used in the re-construction, but most of it will likely be sold or given away. The original building materials will be replaced by new lumber, and some steel will be used to reinforce the frame.

“The only thing that’s realistically going to stay is the stone. All the wood elements will be removed and rebuilt,” said Lammie. “Maybe at some point we’ll have a great big old garage sale or offer it to people who are interested in doing something with it.” 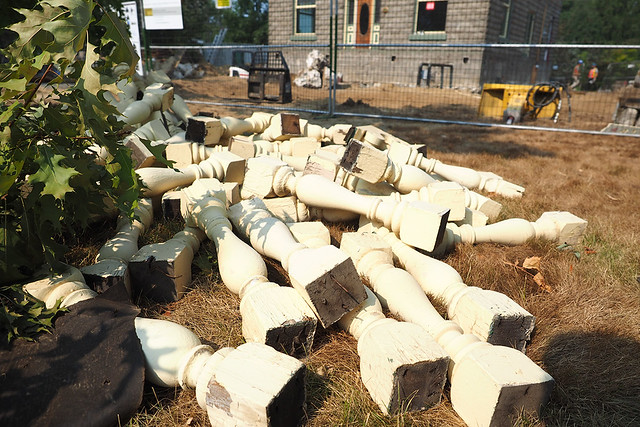 Some heirlooms were donated to the Revelstoke Museum, such as a pair of curved pocket doors and the fireplace mantle. English said they are looking at ways to incorporate them into the museum.

The bricks that make up the exterior will be replaced — a more complicated endeavour than it might seem because they aren’t made anymore. Lammie said he is looking at getting a cast made to replicate the originals.

“I searched extensively to see if I could buy them,” he said. “That’s actually part of the story of the house — they were the first of their kind.”

They are also seeking to use local, sustainable wood for the project and spent last week meeting wth local logging companies about sourcing trees for the new lumber that will be used in the home. Lammie said Take to Heart will be milling the wood for the home.

The project doesn’t just involve restoring the exterior. The interior is being transformed as well to be made more modern and open. Melanie Bernier did the design for the interior. While I have heard criticisms of the interior work due to the heritage nature of the home, Goldman noted it had already been modified in the past when it was turned into a rooming house, that an addition had been made to the rear of the house that was coming off, and some changes over the years did not reflect the heritage nature of the home.

Goldman suggested Robert Howson would not oppose the re-design.

“I’m very comfortable with the way we’re doing it. I think the feeling of the house, I hope it will be attractive,” said Goldman. “I think people will feel there is part of the vision that was there in the beginning, but feel it is a modern usable house in that sense.” 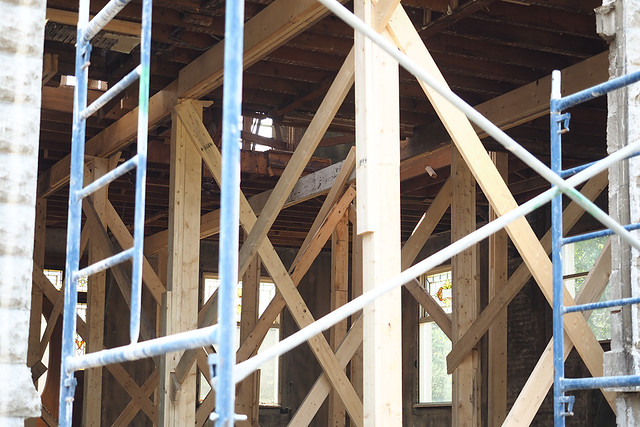 Goldman said he hadn’t decided if the home would be used as a personal residence or a vacation rental (the property is zoned commercial) or both, but he already has people inquiring about staying there. “How we work things has yet to be seen. It depends on how my life goes and how much time I spend here,” he said.

The whole project is expected to take 18 months to complete and Lammie hopes to be finished by December 2018.

“Hopefully when we’re finished, from the look, wherever you walk around the property it will be a good looking house and much closer to where it was in 1905,” said Goldman.

Rising household debt could be drag on long-term growth

Inside a wildfire: Kelowna-area fire sits at 380 hectares

Glimpses of Revelstoke’s past for Sept. 29

Eight up for election for Revelstoke Board of Education